In a press conference held 5th June at the Ministry of Tourism conference room, Powell said the committee was responding to several challenges observed over past years.

“We have had some challenges in relation to the change-overs between acts, so we have worked with the stakeholders, sponsors, and everyone has been able to compromise and come up with a nice solution for entertainment during the change-overs, as well as giving the sponsors their money’s worth,” Powell explained.

Entertainment during the change-overs will be provided by designated hosts and DJs.

Hosting Thursday night’s concert (28th June) is local duo Pinocchio and SugarBowl. That night will also feature one of the two finalists from the Music Festival DJ Competition.

“Both are DJs in their own right, and so they will be hosting and D-Jaying together on that particular night,” Powell said.

The Saturday night DJ will be the second finalist of the DJ Competition. Well-known radio personality GCue will host the Saturday night concert, joined by guest host Karlie Redd of Love and Hip Hop, Atlanta.

Powell is alerting patrons not to come late to the shows, as they will start on time and end at 1 am each concert night.

He said, “We want to use this opportunity to encourage persons to come to the festival on time. We are not going down to 3, 4, 5 o’clock in the morning. We have less artists, and in order for you to get your money’s worth, you have to come on time.”

Powell continued, “We have all headliners. Coming at 10 o’clock, 11 o’clock, ‘fashionably late’, means you might miss half to three-quarters of the show.”

Powell revealed only the opening acts for the various nights. On Thursday night, Destra fires up the venue with her usually heated performances. On Friday night Chackademus and Pliers will start the night of performances, and on Saturday night, the show starts off with Rhythm of the Beat. 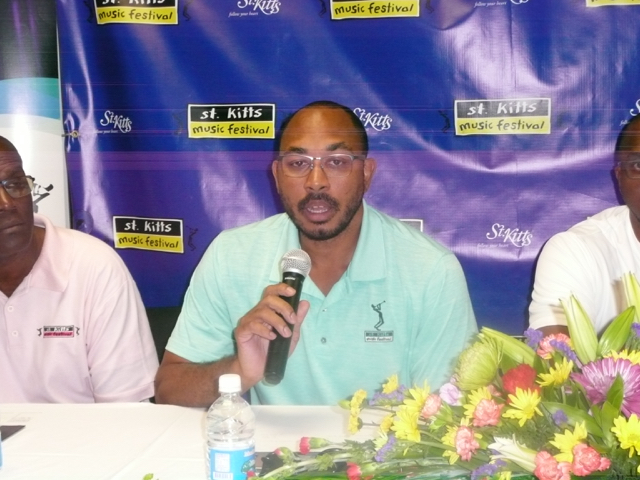 FLOW signs on as ‘gold sponsor’ of the St. Kitts Music Festival
Scroll to top
X